On Wednesday September 21, 2011 at the stroke of midnight New York Time, Nikon fulfilled their promise made months ago for an ILC (interchangeable lens camera). However, the promise was fulfilled with not one, but two new "Advanced" ILCs. The Nikon J1 and V1 cameras (new Nikon 1 series):


The Nikon J1 and V1 have a new 10-megapixel CMOS sensor size called CX, which measures 13.2 mm x 8.8 mm. This new sensor is smaller than the DX and FX sensor sizes found in Nikon's DSLR camera line, but significantly larger than the COOLPIX point-and-shoot cameras. Here is a size comparison of the various sensor sizes. (Graphic created by Nikonians.org Chief Editor Tom Boné): 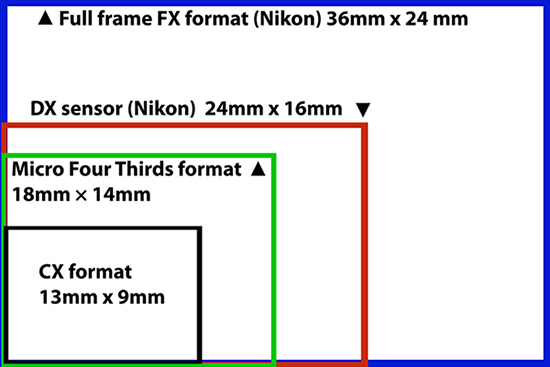 These sizes are rounded off to the nearest millimeter (mm). Clearly, the CX sensor is a small one. Let's hope Nikon has included all sorts of noise reduction capability in EXPEED 3! Shouldn't be too much of a problem with the two cameras wisely limited to 10 megapixels. Here is a look at the imaging sensor with no lens attached:


The CX sensor has a factor of 2.7x the FX format. In comparison DX line has a factor of 1.5x. Therefore, the CX size imaging sensor is little bigger than half the size of a DX sensor.

Nikon is releasing an adapter called the FT1 Mount Adapter that allows you to use your favorite F-mount Nikkor lenses on the new cameras. Evidently, the adapter allows using both newer and older F-Mount lenses on the new J1 and V1 cameras. Here is Nikon's words on the matter: "When the F-mount adapter is mounted on a camera, F-mount interchangeable NIKKOR lenses, manufactured by Nikon for more than half a century, can be used with the Nikon1 J1 and V1."

Newer Nikkor lenses, and most likely aftermarket lenses, should be supported by the camera. Nikon makes a comment about the connectivity of older AF-S Nikkor CPU lenses, as follows: "Autofocus may not perform as expected in some situations or with some lenses. Restrictions apply to mounting and functionality with some lenses."

The list price of the cameras will be as follows:


There will be a dual-lens kit available at additional cost. Shipping date estimated as October 2011.

The camera has a new EXPEED 3 image-processing engine for increased performance and speed.

The autofocus is based on a hybrid system using both focal plane phase detection and contrast detection AF. According to Nikon's research the two cameras have the "world's fastest autofocusing" among ILC cameras as of September 21, 2011. That's a bold statement! When the camera detects movement it uses phase-detection AF for faster focusing and subject tracking. For non-moving and low-light subjects the camera uses the slower but highly accurate contrast-detect AF.

The camera has a 10 frames per second image shooting rate when using subject tracking. Amazingly, when not using subject tracking, the camera increases its continuous high-speed frame rate to 60 frames per second. This is not describing movie mode, this is still image shooting. Clearly, the camera has an electronic shutter to achieve amazing still image frame rates like 60 fps. There are some limitations, though, in the maximum number of images shot at the same time. The V1 allows up to 30 images in the camera's buffer per image shooting burst, while the J1 is limited to 12 images per burst. Use fast memory cards with these two cameras! They'll need to flush those camera buffers to the memory card as soon as possible with such fast frame rates.

Standard shooting speeds for the cameras are 5 fps (60 fps with electronic shutter and fixed AF).

Similar to the DSLR line, the ILCs will support all three light metering modes, as follows:
The camera has a built-in dust reduction system. For new ILC users the cameras offer an Auto Scene Selector mode, which automatically optimizes camera settings for the subject. This is designed for those unsure of how to adjust camera settings themselves. The cameras also have a menu system with reduced complexity.

The cameras have four shooting modes, as follows:

Still image
The camera takes a single image with each press of the shutter-release button.

Movie
The movie mode supports 1920 x 1080/60i High-Definition video. That is 1080i HD. The camera comes with special "Short Movie Creator" software allowing you to assemble creative movie segments up to 30 minutes in length. This includes the styles and background music.

The J1 series of cameras come in five colors. The lenses can be purchased with colors matching the camera body. Here are the colors:

The V1 series cameras are only available in two basic colors, as follows:


Internal Electronic Viewfinder for V1 Only

The J1 camera uses the rear monitor for all image and movie taking and viewing. The V1 allows you to use the rear monitor or a built in viewfinder containing a 1440K-dot EVF. The viewfinder is high definition and bright, with 100% frame coverage through the lens. It has a unique color filtering system that guards against the rainbow artifacts seen on other lesser ILC/EVIL cameras when a subject is moving. This is Nikon, after all! I guess this viewfinder moves the V1 squarely into the EVIL (electronic viewfinder interchangeable lens) camera category.

The cameras support both RAW (NEF) and JPEG shooting, with Active D-Lighting when needed to protect highlight and shadow detail in the JPEG images.

Released with the two ILC cameras are several new "1 Nikkor" lenses and a new Speedlight SB-N5. The cameras are part of a system or family, as shown in our next picture:

The four new CX lenses released for the new ILC line include three compact and lightweight kit lenses and a power-drive zoom lens. Nikon has added the new Nikon 1 mount in the tradition of the F Mount that goes back over 50 years. The new mount is developed specifically for the Nikon 1 series of cameras and lenses. Following is a look at the new lenses along with their names and focal lengths: 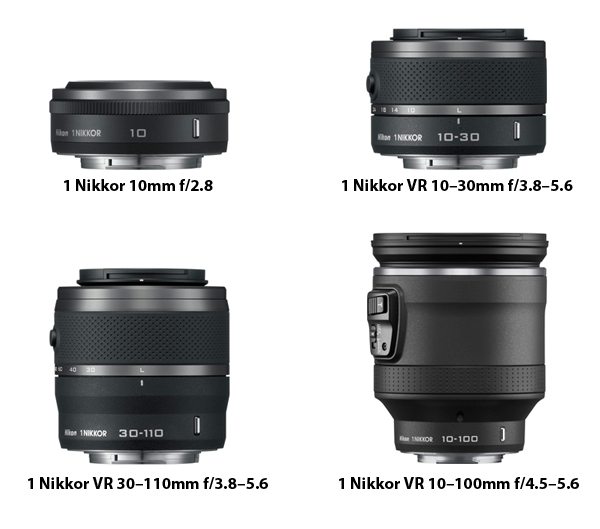 Following are the basic specifications on the new Nikon 1 lenses:

The J1 has a built-in flash, while the V1 uses the new Nikon SB-N5 Speedlight flash unit. The V1 can also use the new GP-N100 GPS unit. Both the flash and GPS are shown below:

The SB-N5 Speedlight has the following specifications:

The GP-N100 GPS unit has the following specifications:

Nikon promised and delivered on a new ILC/EVIL camera system for 2011. The cameras have new technology and promise to deliver superior results. An ILC camera is a great addition to a photographer's arsenal, for those times when only a small, high-quality camera and lenses will do. The new J1 and V1 are parts of a camera system that allows you to invest in quality for the long term. With the new Nikon 1 mount, the future holds much promise for new lenses, while still allowing us to use our F-Mount Nikkors. The best of both worlds. Thank you, Nikon!

Keep on capturing time...
Darrell Young
See my Mastering The Nikon DSLR books at:
http://www.photographywriter.com/NikonBooks.asp
Posted by Darrell Young at 6:40 AM

Darrell Young
Darrell is author of the Mastering the Nikon® DSLR book series published by NikoniansPress/Rocky Nook. He's a professional writer and photographer living within a few miles of the Appalachian and Blue Ridge Mountains. — You can communicate with Darrell at his website: www.MasterYourNikon.com